While most people of the village will be aware that the Northward Hill RSPB nature reserve is an SSSI, or at least would not be surprised to find that it is, few seem to know that there is another area of the village designated as an SSSI or the reason for it being so. 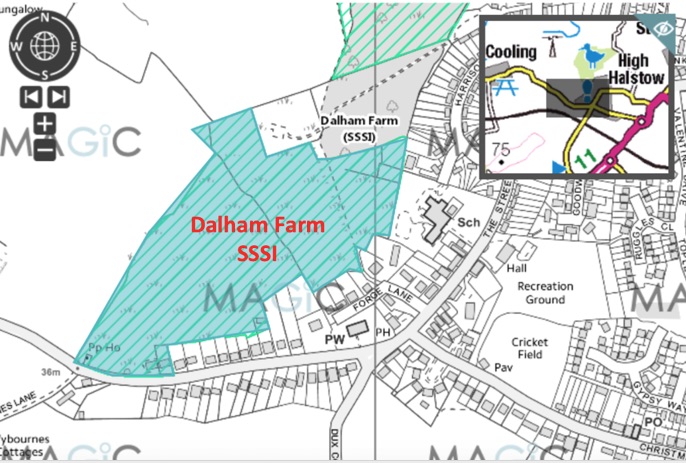 Map of the area occupied by the Dalham Farm SSSI.

Further to the request for memories of High Halstow, I would like to offer some of my memories. I lived in Harrison Drive from 1956 to 1967, when we moved to West Sussex, when I was 12 years old. I loved my childhood in the village, and have lots of good memories. One that stands out […] Read more February 2012

Egypt Bay and Shade House, Cooling
TQ777782 7m E of Gravesend. Go east from Cooling along Britannia Road, and take the first left up Clinch Street. About 1.5 miles from the junction the road continues as a track beyond a locked gate. Follow the track N. The square brick outline and white shutters of Shade House soon come into view on the left, and Egypt Bay is a little more than a mile from the gate. Egypt Bay on the Hoo peninsula was a typical Thames estuary landing spot, though its soft […] Read more November 2011

A Piece Of Village History

Eden Road and Harrison Drive rebuild…I remember it well! Back in the early 1980’s, an acquaitance of mine knocked on my door and introduced me to a Mr Roy Puddie and his friend from Trevale Road in Rochester. What came of this meeting was to change the face of High Halstow forever. They informed […] Read more October 2011 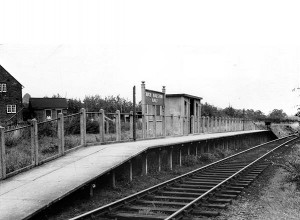 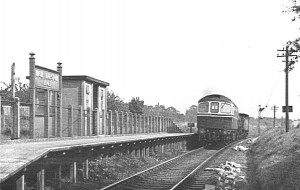 Do you remember the High Halstow Halt Station in operation? Do you know where it was? If not please click here to read information provided by Nick Catford
March 2011

I do not believe in ‘ghosts’ or other manifestations but for candidates we can go back to 1752 when John Grace, returning home after being thrown out of the ‘Dog’ (as the Red Dog was then called) brutally beat to death his long suffering wife Mary Her dying screams and pleas for mercy were heard by passers […] <a href=”>Read more

Was High Halstow the Inspiration?

You may recall Harry Lewis Hillier; he was one of the men who returned from the 1st World War and one of those, for whom the Memorial Hall was built. His picture and name along with the others who returned hangs on the wall inside as a reminder, lest we forget. Harry Louis Hillier, Harry […] Read more

Killed – Answering the Call of Duty

Towards the right of the ancient path leading up to our church of St. Margarets, you will find a grave and headstone dedicated In Loving Memory of Mabel Ossenton. Killed Answering the Call of Duty at the Outbreak of War, 3rd September 1939. ” While the light lasts we will remember.” ‘Killed on way to […] Read more

The dramatic opening setting of ‘Great Expectations’, possibly the best loved novel by Charles Dickens, is often claimed as set in the churchyard of St James, Cooling, although some disputed that the area was Higham church. Yet to us who live in our beautiful village, are familiar with our Church – St Margarets, our countryside, […] Read more

George Jewell, now a tall, sprightly 81 year old gentleman who is often seen strolling through our village, High Halstow, with his dog ‘Honey’. has lived here all his life. Among his fond memories is a photo taken in the Summer of 1946, less than a year after the end of the 2nd. World War. […] Read more

The Tithe Barn had reed thatching at the back; at the front and on the ends it was straw thatching. Reed thatching was good enough to last a century; there were a couple of re-thatchings of the straw in Mr. Plewis’s time there (1921-71) The Tithe Barn’s dimensions were 70 feet by 30 feet. It […] Read more

“Muddies” dug for Medway blue clay. It was tidal work, so they had to work swiftly. There were four in a gang, working downwards, and it was the forth worker who actually extracted the clay. They came out as four inch cubes, which was the size of the blade. It has been said that working […] Read more

Town Hill was part of Ducks Court Road going down from High Halstow to Dux Court. The town referred to in the name is Rochester. (Going to town) The top part of Cooling Road was known as Station Hill. Stations were at Cliffe, High Halstow Halt Sharnal Street and Beluncle. Mr. Plewis remembers seeing King […] Read more

There are no “Frogs”

The North wall of the church was sinking in TW Lonfields time. There were no foundations to the local churches. Mr. Plewis uncovered an inch-deep black layer beneath the base of the walls, made of rotten flora over the centuries. Mr. Plewis’s father said that it was the growth in the topsoil which had held […] Read more

Mr. Plewis knows of no war damage at all to the church. The nearest bombs to fall were on the marshes and beside the Britannia Inn. The Britannia Inn was near the Bungalow, but nearer the corner of the road than the bungalow. It was damaged in the war when a bomb dropped in the […] Read more