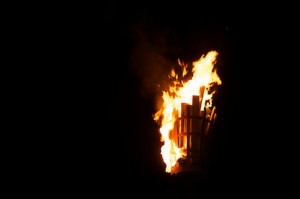 Contingency plans made in the event of bad weather were fortunately not needed as the Jubilee in the Park day arrived. 220 children arrived to start the event with a tea party. Organised by Jo Mitchell and her army of helpers, all were seated fed and watered and the party well and truly began

With the tea room in the Hall, cake stalls and the bar the audience were never without refreshments. (Except for running out of Pimms so early in the proceedings)

It was great to see John Pink lighting the Beacon with the torch flown in specially on Concorde from the Montreal Games and the stress lines appearing on Dave Harris’s face as he informed us he was normally responsible for putting fires out and not starting them.

What shall we do next year?

This entry was posted in Blog and tagged Diamond Jubilee. Bookmark the permalink.