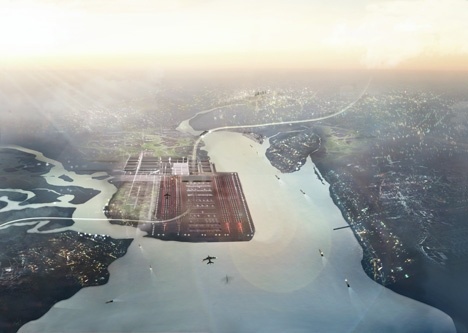 Details of privately developed plans to build a four runway airport on the Hoo peninsula have been formally unveiled. The ambitious plans link freight connections between sea ports to the passenger airport, built on a tidal energy barrage and flood protection barrier.

A multi-runway airport capable of handling 150 million passengers a year is the central plank of ambitious plans for a £50 billion transport hub in the Thames Estuary.

The Thames Hub plans have been outlined by architect Lord Foster, who was responsible for designing Hong Kong’s island airport.

The plans call for a four-track, high-speed passenger and freight orbital rail route around London, which links to a future high-speed rail line to the Midlands and the North, the Thames Estuary ports, High Speed 1 from the Channel Tunnel to London and European networks.

The four-runway airport has been put forward as an alterative to London mayor Boris Johnson’s vision for an island airport in the Thames and would be located on the Isle of Grain in Kent.

Lord Foster, describing his plan as an “integrated vision for Britain,” said: “If we are to establish a modern transport and energy infrastructure in Britain for this century and beyond, we need to recapture the foresight and political courage of our 19th century forebears and draw on our traditions of engineering, design and landscape.

“If we don’t then we are denying future generations to come. We are rolling over and saying we are no longer competitive – and this is a competitive world. So I do not believe we have a choice.”

Lord Foster, chairman and founder of Foster + Partners, believes the Thames Hub “will lay the foundations for the future prosperity of Britain”.

“It will put in place the transport connections Britain needs in order to maximise its trade links with the rest of the world. It will create jobs across the UK, balance the economy between North and South, and boost the economies of the Midlands and the North by providing them with direct connections to the cities and markets of Europe.”

The estuary airport is designed to be integrated within a “logistics matrix” that connects by rail the Thames Estuary ports with the ports of Liverpool, Southampton and Felixstowe.

A major renewable energy source in the Estuary is associated with the hub together with a new Thames barrier crossing extending flood protection to London and the Thames Gateway into the 22nd century. The barrier would harness tidal power to generate carbon-free energy.

The following link will help you voice your opinion.

This entry was posted in Blog and tagged Airport, Cliffe Airport. Bookmark the permalink.