On the 20th December Medway Council’s Cabinet will meet to discuss the three estuary airport proposals. They will be given a presentation by Robin Cooper, Director of Regeneration, Community and Culture. 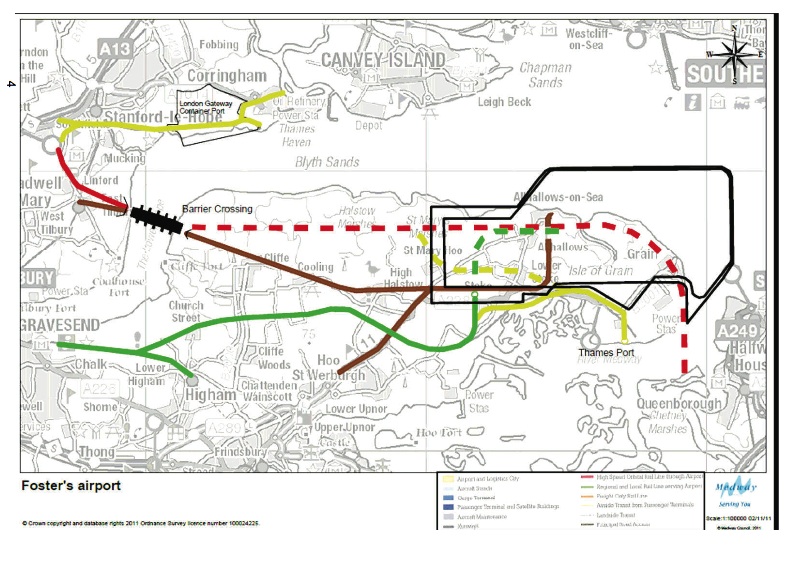 That Cabinet recommends Full Council reaffirm its strong opposition to the current plans to construct any of the new International Airport proposals in, or close to, Medway and agrees to work with neighbouring authorities, local communities, businesses and environmental groups to oppose these proposals on the following grounds:

It would adversely affect homes in Medway, Kent and Essex and lead to the demolition of people’s homes. An airport would cause environmental destruction to sites of special scientific interest and internationally important areas where hundreds of thousands of birds migrate to annually.

As the Thames Estuary is a hub for hundreds of thousands of birds, there would be a significant risk of bird strike. Even with an aggressive bird hazard management programme, such as shooting or scaring birds away, the bird strike hazard would be up to 12 times higher than at any other major UK airport (source: RSPB).

An airport would increase the pressure for additional major development due to the increased attractiveness of the areas of business. This could result in vast swathes of Kent and Medway being lost to development. At least 320 business are directly associated with Heathrow, there are hundreds more supporting the airport and Heathrow employs 72,000 people. If the Thames Estuary airport were to replace Heathrow many of these people would move to Kent and Medway, leading to significant house building and infrastructure requirements. One report suggests a need for up to 83,000 additional houses.

The airport reports do not properly consider the risks associated with operating an airport in close proximity to the existing import facility for liquified natural gas (LNG) at Thamesport and the munitions on board the Montgomery and the proximity of a container port and power stations. Existing airports already have potential to increase capacity. For example, Birmingham says it could double the passengers it carries. Southend and Manston have additional capacity.

Better use needs to be made of existing regional airports by improving connectivity. The cost of a new airport would be prohibitive (up to £70 billion).The noise, light and air pollution would be intolerable and exacerbate CO2 emissions.

The airport would be fogbound and affected by high winds. Nearly 9 out of 10 international airlines that use Heathrow are against an estuary airport and over 3⁄4 of people polled in the UK. That Cabinet agrees to set up a cross party Cabinet Airport Advisory Group with the aim of advising on the Council’s strategy for joining with others to oppose plans for International Airports in or close to Medway
and Kent and that the Director of Regeneration, Community and Culture, in consultation with the Leader, be delegated authority to finalise the composition of the Group.

Reasons suggested for this Decision are:-

International airports in, or close to, Medway would have devastating impacts on residents’ amenity and on the environment of Medway, Kent and Essex and should therefore be rejected. Two of the proposals also lead to the demolition of people’s homes and in the case of Lord Foster’s proposals the removal of whole communities such as the village of Grain and surrounding settlements.