Never make plans that rely on mother nature as you will invariably be disappointed! We had planned to accompany RSPB on a boat trip to show journalist the site of Lord Foster’s Thames Estuary airport, off the Isle of Grain. On the way across to Queenborough to meet the boat we learnt that the trip was postponed in the face of a force eight. 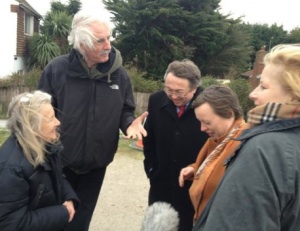 We regrouped on the Isle go Grain to view on foot and were fortunate to meet senior members of our local Labour group and Maria Eagle the shadow minister for Transport who was visiting the airport site first hand. A great opportunity for us to outline the international importance of the estuary for some 350,000 migratory wildfowl and how they would render any airport 12 times more dangerous than any other major UK airport.

Maria was able to witness for herself a real feeling of wilderness for which the Thames estuary marsh is renown and which Charles Dickens so romantically described in the opening words of his novel Great Expectation. A wilderness containing 5 of England’s 84 Special Protection Areas designated under the European Birds and Habitats directives.

Maria called for better use of existing aviation capacity and ruled out Labour’s support for an Airport in the Thames Estuary.

This entry was posted in Blog and tagged Airport, Maria Eagle, No Estuary Airport, rspb. Bookmark the permalink.