Mr. Plewis knows of no war damage at all to the church. The nearest bombs to fall were on the marshes and beside the Britannia Inn. The Britannia Inn was near the Bungalow, but nearer the corner of the road than the bungalow. It was damaged in the war when a bomb dropped in the field opposite. Incendiaries dropped one night causing the area from Marsh Gate farm to High Halstow to look like fairy lights. 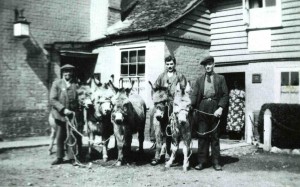 Mr Topley was foreman at Lodge Hill. There was a battery in the cricket meadow at Cooling. A framework was constructed at Lodge Hill, with six rockets, their barrels filled with Mills Bombs (36 Bombs). Rangefinders were fired by pushbutton, which was operated by a pocket torch battery. The rockets exploded at a certain height, grenades bursting out which then exploded. The next time enemy aircraft appeared, they were firing twelve rockets instead of six.

Kingsnorth was the centre of airships. There was a royal Air station at Grain. The airships were used for submarine spotting. Grain Fort dates from the time of General Gordon – there was also Shorne Fort and Cliffe Fort. Admiralty oil tanks at Grain were used for refuelling battleships in the First World War. The Thames was often a mass of battleships

One Response to “The War Years”