In 2003 when government launched its consultation into aviation expansion in the South East, for our part of the Thames Estuary, the announcement was like a bolt from the blue. This sleepy corner of Kent with its strange mix of dramatic Dickensian landscapes interspersed with power stations, oil refineries and everyday folk was suddenly thrust into the spotlight of progress ! 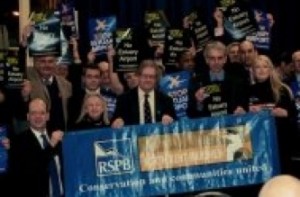 A wave of unanimous protest, indignation and anger spread across the peninsula into the surrounding towns of Medway, Gravesend, Sheerness and beyond. Such was the feeling here that detractors could almost have been considered traitors! One local building society had investors withdrawing their life savings because its Managing Director was in favour of an airport.

Today we are all ten years older and seemingly ten years wiser. Between December 2004, when Alistair Darling (the then Secretary of State for Transport) ruled out the Cliffe option and the intervention of Boris Johnson in 2008 with his proposals for an Estuary Airport, opinions have developed on all levels.

Some who were on the periphery of the debate in 2003 are now talking knowledgeably of climate change and the effect of aviation on the UK’s carbon targets. Others are experiencing the frustration of blight and uncertainty, fearing for the future; a few just want to get out. Many have joined the RSPB as volunteers on its reserves.

George Osborne’s talk of jobs and the economy has compounded the issue. There has been a fleeting perception that an airport built in the Thames Estuary will bring the panacea of immediate prosperity. That is, until the realisation of the full implications of how far into the future the project would be, and what everyday life would be like here over the next 30 years while new roads, railways, houses, factories and head quarters are built. In fact comparable to what it was like living close to Heathrow while it was developed.

Most people now, thankfully, understand how precious the Thames Estuary is and the importance of the international biodiversity protection afforded to it by the European Union.
Prior to the release of the review into the Habitats and Wild Birds directives, Government ministers never publicly acknowledged their role or their importance for the Thames Estuary. When Caroline Spelman (Sec of State for the Environment) spelt out in the introduction of her review that Government was keen to make the directives simpler for developers to understand, we breathed a sigh of relief. Now we can argue in the knowledge that MPs are aware of these precious places and that the directives are not gold plated nor stand in the way of progress, as the Chancellor indicated.

Despite the review, an Estuary option is still under consideration and will undoubtedly be in the upcoming consultation. We have hit the ground running this time round and have a far wider spectrum of organised support, with powerful, passionate and articulate opposition. Populations and Councils all around the Estuary are becoming more aware of the implications of an airport on their doorstep. And they are saying NO!

George Crozer is founder member of the Friends of the North Kent Marshes, http://www.northkentmarshes.org.uk/ and Parish Councillor of High Halstow, at the centre of the Hoo Peninsula, one of many villages under threat from airport proposals on the Isle of Grain
The Greater Thames Marshes area has now become a Defra Nature Improvement Area.
http://www.airportwatch.org.uk/?p=1327

This entry was posted in Blog and tagged Airport Watch, No Estuary Airport. Bookmark the permalink.