Town Hill was part of Ducks Court Road going down from High Halstow to Dux Court. The town referred to in the name is Rochester. (Going to town)

The top part of Cooling Road was known as Station Hill. Stations were at Cliffe, High Halstow Halt Sharnal Street and Beluncle. Mr. Plewis remembers seeing King George and the Kaiser go past – the Kaiser with his back to the engine and King George facing the other way. The coal on the tender was whitewashed, black coal underneath actually being used. Port Victoria boasted an hotel and a yacht club. Before the advent of Anglo- Iranian there were plans to make port Victoria a royal yacht club, similar to Cowes The ground floor of the yacht club was of Italian mosaic. 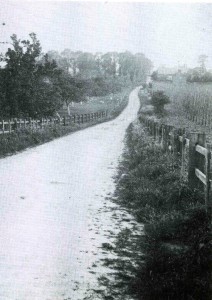 The Lane from Deangate to High Halstow

In Mr Plewis’s opinion, Cooling Road was in ancient times the riverside, the path of the road being solid ground the animals would walk along. The square ness of the shape formed by Cooling Road might have been due to the way the Romans had set things out.

Before you get to Eastborough Farm bungalow, Lipwell is down in the valley. The area from Lipwell to the marshes is known as The Moors. The tide used to come up there – Buckhole Wharf and Dalham Wharf bear witness. Could the Kentish rag used for High Halstow church come up this way? Borough Green and Plaxtol are the nearest places where Kentish rag can be obtained

“Old Forge House”
There are no “Frogs”