Was High Halstow The Inspiration?

You may recall Harry Lewis Hillier; he was one of the men who returned from the 1st World War and one of those, for whom the Memorial Hall was built. His picture and name along with the others who returned hangs on the wall inside as a reminder, lest we forget. 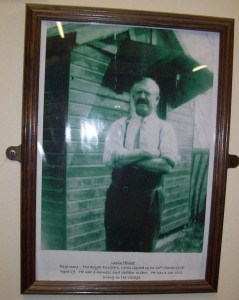 Harry Louis Hillier, Harry Lewis’s son recalls; “My Father who was a Doctor Banardos boy was drafted into the Fusiliers as a harness and port mento maker. He was injured in the battle Verdun where he partially lost his sight due to shrapnel lodging itself behind his eye. Latter in life his eye was removed after complications. When he left the army dad became signalman at Port Victoria station but because of his injuries he was given lighter duties and was moved to High Halstow Halt near Wybournes Farm. I was about six years old at the time. In later life Harry Lewis Hillier (Harry’s father) became the local radio expert and built many radio receivers and television sets for villagers. Harry has fond memories Mr Mayhem the local shop keeper who was extremely benevolent during the General Strike Harry said “Mr Mayhem never said no to anyone even though we were all very poor”

When Harry Hillier (born 1918) was a boy he remembers well, the forge next to ‘Forge House’ was locally known as “Pips Forge” as they thought it to be the forge that was used in Great Expectations.

The other forge, the main forge, was in the Square which is now known as Forge Lane. It was owned and operated by Alf Laudle from Cliffe. Mr Plewis the Wheel Wright would make cart wheels in the barn at the rear of Pips forge and roll them down the lane to the main forge in the square where, set in the ground, was large iron plate about inch and a half thick with a hole in the centre sufficient to take the wheel hub. Alf Laudle and his team of two would gradually heat the iron tyre in the large hot forge then pick it up with enormous tongs and hammer it tight to the rim where it would be shrunk with buckets of water binding the wheel together amid great clouds of steam and the smell of burning timber. It was much too dangerous to shrink the tyres on to the wheels in Pips forge for fear of fire as in those days Forge House was thatched.

The youngsters of High Halstow were considered to be very well behaved by others on the Peninsula primarily because of Mr Baskin the head master of the School who was fair but very strict. Baskin only let the boys out of school to act as pall bearers at the funerals of children Harry said “We all used to do odd jobs about the village to help our parents out. I was paid 4 /3p per month to pump the organ in the Church, clean Rev Longfields boots, and cutlery and walk to Dalham farm and back to collect his milk. When we as boys visited Hoo or Stoke we were stoned out of the village. I think they thought they were after their girls”

One Response to Was High Halstow The Inspiration?

Ghost’s in High Halstow
Killed – Answering the Call of Duty…