The dramatic opening setting of ‘Great Expectations’, possibly the best loved novel by Charles Dickens, is often claimed as set in the churchyard of St James, Cooling, although some disputed that the area was Higham church. Yet to us who live in our beautiful village, are familiar with our Church – St Margarets, our countryside, and some local history, High Halstow (Home of the Heron) was the obvious inspiration.

In brief, Magwitch, who had escaped from a prison hulk, was discovered by Pip, in the churchyard, hiding by six lozenges – small, sad, tombs of children. The church had a spire, overlooked the marshes, with the blacksmiths forge, where Pip lived nearby. Charles Dickens was never asked what background he used as the setting although it is known that he researched detail and drew heavily upon his own observations and experiences. He was keen on walking and roaming our countryside from his home at Gads Hill and even journeyed by boat on the Thames to study the effects of tides in the area. Let us consider the evidence: 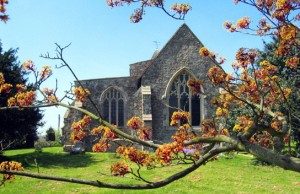 Cooling church has a spire. It is situated near the marshes, in those days a somewhat miserable place. There are thirteen desolate lozenges of the Comport family children in the churchyard. Although there is no record of a forge, it is claimed that the name of the pub, Horseshoes and Castle, indicates there had been a smithy

Higham church has a spire. Is close to the marshes and the Thames. Had a blacksmiths forge – Forge Lane, and was a favourite area of the great man. High Halstow Church has no spire – now. However maps of the 18th Century, and earlier, show a magnificent spire. Later struck by lightening, demolished and the tower rebuilt by the Victorians.

There was a forge nearby, about the site of our present school, and hence of course Forge Common.

Egypt Bay, the anchorage for some prison hulks from where Magwich might have escaped is in our parish of High Halstow, not Cooling. 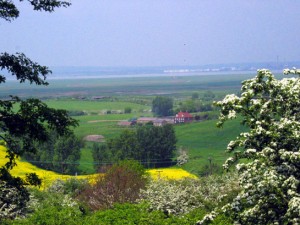 St Margaret’s and Forge Common are on the highest point of a northern ridge way with Stephen Gwilt’s, rectory garden, amongst others offering some of the most magnificent views of the marshes, the River Thames its bays and inlets ( and in those days the prison ships). Although without evidence, either for or against, our parish with its views and history were I suggest a definite must for anyone with Charles Dickens interests.

Lastly, anyone visiting our church, St Margaret’s will see in the churchyard, near the church door, the six small lozenges, also of Comport family children . Great Expectations was published in 1860, the last Comport child to die, presumably also of the plague, was interred alongside his brothers and sisters, some two years earlier.
Read Charles Dickens wonderful book again. Visit our churchyard and the lozenges of the Comport children, perhaps pray quietly in our small, peaceful but wonderful church, and judge for yourselves.