George Jewell, now a tall, sprightly 81 year old gentleman who is often seen strolling through our village, High Halstow, with his dog ‘Honey’. has lived here all his life. Among his fond memories is a photo taken in the Summer of 1946, less than a year after the end of the 2nd. World War. It shows him as a strapping 20 year old farm hand, with other farm hands, land army girls and German prisoners of war, harvesting down towards High Halstow marshes. They were all working for Hill Farm (now Hill Farm Close, Christmas Lane) the photograph being taken by their boss, Brian Rayner. 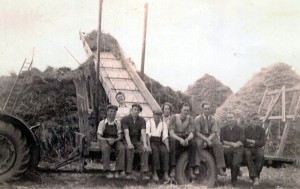 But the peace of their warm, happy, summer’s labour was shattered by a supersonic bang, and a startled George Jewell, looking up to the sky saw the tragic demise of a graceful swallow. For the booming explosion was the end of a Dh108 Swallow, and its pilot, Geoffrey deHavilland (Chief Test pilot for his father, aeroplane designer Sir Geoffrey deHavilland) George describes seeing pieces of this experimental jet plane disintegrating upwards and outwards like an exploding jig saw puzzle and watching horrified as one entire wing spiralled down into the estuary.
The Dh108 Swallow, which was designed with experimental swept back wings, was the first turbo jet to reach mach 1, the speed of sound, and the supersonic boom as this was reached was both the death knell of its brave young pilot and the very first time such sound was heard over Great Britain, and of course, High Halstow. There were only three of these experimental aircraft ever built, the first taking to the skies on the 15th May, 1946. The first two crashed during trials but the third was more successful for Group Captain ‘Cats Eyes’ Cunningham flew it to become the first pilot to break the speed of sound, in a turbo jet, and live. Our children might well blame the late Group Captain Cunningham for being made to eat carrots, as their great grandparents will no doubt explain. The Dh108 was a prototype of design for the Nimrod aircraft and the ill fated Comet.

But to George Jewell this event was but a tragic coincidence to another Geoffrey, father and son,  and another deHavilland aircraft. In 1938, as a 12 year old leaving with his school pals from High Halstow school, they saw an aircraft overhead, and an old boy of the school, stunting and mock dive bombing them in an RAF deHavilland designed aircraft. Their headmaster, Mr. Bastin, was not amused and complained bitterly to the Rector of St Margaret’s Church, the Rev Geoffrey Longfield (Longfield Close). For they all guessed that the pilot was his son, Geoffrey Longfield, a lively and energetic offspring of our village. Squadron Leader Geoffrey Phelps Longfield, 27220 RAFVR, 105 (Bomber) Squadron, Royal Air force, died 22nd February, 1943, aged 33 years, killed by enemy action whilst leading his wing on a mission. He is buried at Rennes Communal Cemetery, France. R.I.P.

George Jewell can be found at Evensong, every Sunday evening at St Margaret’s. Visit him there, perhaps say a prayer for those brave young men and women who served our country so well, and later chat about the olden times