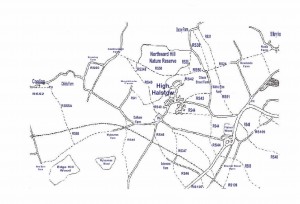 The village of High Halstow is host to a very scenic section of the Saxon Shore Way. Walkers will delight in the deciduous woodlands and the panoramic views of The Thames acting as a backdrop to the Halstow Marshes  Although fiercely protected by by-laws and statutes, the footpaths that meander through the parish are now for the enjoyment of man and his dog. Not so a brief 50 years ago, before the onslaught of the motor car, when each path ended in a designated place of employment for farm workers, shepherds and fishermen.

There are many footpaths to enjoy in and around High Halstow, many of these are official rights of way but there are also a number of popular trails on common land.  Villagers and visitors alike are most fortunate to have access to the RSPB Northward Hill Reserve. With the exception of RS50, all paths are accessible to the public by kind permission of the RSPB who maintain these paths. Entry is strictly forbidden to the Sanctuary area, however, except with express permission from the Warden.

Each season brings its own delights together with a few drawbacks. Spring sees carpets of bluebells and garlic-mustard, patches of violets too but sadly, more rarely now, the humble primrose. The song of the nightingale on a spring night evening is enchanting. On the downside, the paths tend to get quite muddy, despite the fact that the RSPB widened some of them. Suitable footwear is advisable.

During the summer it is pleasant to sit on the lawn area of the wood and admire the oaks, butterflies and birdsong. Walkers are grateful to the public-spirited villagers who collect the rubbish left by the mindless. Nature, at its most rampant, results in nettles and brambles constantly trying to invade the walkways. Take a stick, if attempting more inaccessible paths. Remember to always adhere to the pathways, thus encouraging the birds to nest in the public area of the wood. Visually, autumn is undoubtedly the most beautiful. The common Field Maple, insignificant during the rest of the year, erupts in a blaze of yellow. Hips, haws, blackberries and sloes make the ingredients for tasty jams. A myriad of different fungus burst forth, including, unfortunately, the stinkhorn where walkers are advised to hold their breath.

Dew on a cobweb, hoarfrost on the blackthorn. Winter has her more subtle attractions 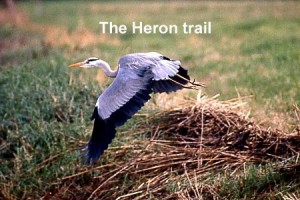 Following negotiation with RSPB a pretty much final route for the Heron trail has been marked out. Starting from Forge lane it runs northward across Dalham farm SSSI (the horses field) and into the Nature reserve, it will then runs close to the edge of the wood on the existing pathway until meeting the Saxon Shore way where it will turns left, dip down past the Viewing seat to the gate adjacent to the cherry orchard. At this point the trail will lead out onto the marsh and after crossing the dyke hug the edge of the wood until it emerges at the proposed viewing point.

The viewing point as well as the trail will be well stocked with seating for frequent rests and interpretation signage to explain what you can see and hear. The return journey takes in an entirely new section of woodland rich in wildlife and will emerge into Forge common near the northern corner. A gentle walk diagonally across the common will return you to the start point via White Road

Provision has been made to include a toddler trail much shorter in length and starting from the white road car park. Although RSPB will be funding this project they have agreed to let us help with the design of the signage and positioning etc. If you are interested in walking the proposed route early in July or joining in with helping with footpaths or the common please let me know. George Crozer

Mayor Opens Next Chapter of Public Access to the North Kent Marshes
The Mayor of Medway, undaunted by the blizzards, led the way out to a Marsh Viewpoint yesterday (Friday 4 March, 2005) to officially open the Heron Trail at High Halstow. 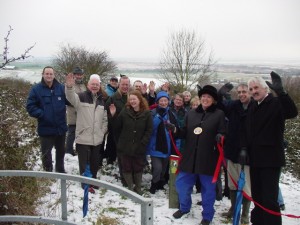 The Trail allows the public for the first time to walk right around the RSPB’s Northward Hill reserve to a viewpoint which looks up into the UK’s largest colony of herons and egrets.
“I am so proud to be able to open this Trail,” said the Mayor. “I have so many fond memories of exploring the Marshes as a child when my father worked at the radio testing station here. I used to see the herons then, which were something of a well-kept secret. Now for everyone to have the chance to come and enjoy them and the Marsh landscape is wonderful.”

Despite the appalling weather, over 50 people still turned up for the opening and enjoyed the hospitality of High Halstow Parish Council.

The RSPB’s Regional Director, Chris Corrigan, who travelled up from Brighton for the opening, declared it another milestone in the Marshes’ history. The Northward Hill reserve had been gifted to the RSPB in 1956 but it is only in the last six years that the RSPB have made great strides in acquiring more land on the Marshes such as their Cliffe Pools reserve, and in starting to enhance access.

The Trail is a collaboration between the RSPB, High Halstow Parish Council, and the local community group The Friends of the North Kent Marshes.

“This trail is very much something for local people,” said Chris. “But it is by conservation and communities working together in this way that we can also realise the Marshes’ potential for green tourism. From Gravesend to Whitstable, what we have here is brilliant for wildlife and can be brilliant for people too.” The Mayor herself expressed her amazement at the range of displays, leaflets and literature on show which are now available to promote the Marshes.

A free guide to the Heron Trail is available from the RSPB by ringing 01634 222480 or email northkentmarshes@rspb.org.uk. Alternatively you can view the trail from the following link Heron Trail. A wide range of information about the Marshes is on The Friends of the North Kent Marshes website at www.northkentmarshes.org.uk

A particularly pleasant walk exits from the end of Longfield Avenue: RS42 joins the Saxon Shore Way. Turning right in the direction of St Mary Hoo, you will see their Church appear in the distance. A small section of lane leads onto RS24. Here you do not turn left immediately onto RS38 but proceed towards the distant church until you reach the well signposted footpath cross-roads.

Turn left here and shortly you will arrive at an area where the blanched remains of lightning-struck trees bear witness to the elevation. The panoramic views of the Thames from this point are most impressive. RS38 leads you over two stiles and descends between the field fence and some woodland.

After another stile the path proceeds inside the hedge, giving an impression of seclusion. The lane you arrive at leads ultimately to the Thames but you turn left here, back towards the village, passing through the tiny hamlet of Decoy. Shortly after passing the RSPB car park, you turn right onto RS39 and make a fairly steep ascent through the corner of Northward Hill Reserve. Another stile and a diagonal path across the corner of a field will lead you back alongside an elm hedge to the point where you joined RS24 on your journey out. At a comfortable leisurely pace, allow an hour.

According to the appraisal, a massive 42% were willing to assist in maintaining footpaths. Budget provision from next financial year includes the provision of footpath signs to show villagers and visitors alike the way around the various walks.

The Village Project Day started last year has initially concentrated on litter picking on the main roads into High Halstow. The intention is for the number of projects to increase along with the number of volunteers. Footpath maintenance is one of the projects the Parish is hoping to add to the list in order for us all to enjoy. In the meantime we can all do a little to assist with footpath upkeep, the silent majority will be grateful to you. A sweet wrapper picked up here or a bramble cut back there, these tasks will not go unnoticed.

Medway Council are pleased to announce they have signed a legal agreement to create a permissive bridlepath between Wybournes Farm, High Halstow and New Barn Farm, Spendiff.

The path has been created with the generous agreement of the landowners/farmers, Richard Whitebread and Harold Osenton. So far its been waymarked by volunteers and further signage will be installed next week.

The new permissive bridlepath also provides a link to a footpath (RS/55RS55A) which leads to Cooling, previously this path would’ve been a dead-end for walkers. Please find below two links showing the location and the length which may be useful.

This entry was posted in Council Responsibilities. Bookmark the permalink.