The Tithe Barn had reed thatching at the back; at the front and on the ends it was straw thatching. Reed thatching was good enough to last a century; there were a couple of re-thatchings of the straw in Mr. Plewis’s time there (1921-71) The Tithe Barn’s dimensions were 70 feet by 30 feet. It was built of elm, elm lasts but cannot be “mucked about with” and so it could not be dismantled and rebuilt at Singletons or elsewhere. 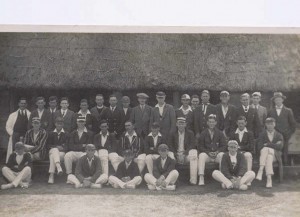 The last new wagon was built at the tithe barn in 1930, and repairs carried on until the end of the Second World War. Wheel wrighting was deteriorating during Mr. Plewis’s apprenticeship. He took over from Mr. Harryman who retired in 1930. Charles Bloomfield, who was also an apprentice, brought up the business. Bloomfield had two other wheel wrighting businesses elsewhere, and sold one of them to purchase the High Halstow business.

The Revd. S.G Davidson said that he hoped Mr. Plewis was not going to pass the tithe barn workshop on to his chap on his retirement, as the church wanted to sell it. Mr. Plewis felt that the Revd Davidson was under pressure from the diocese to dispose of the barn and land. Mr Plewis got rid of the “two-handed” jobs the year before and was due to retire, so that his chap would have the opportunity to look round for another position, and spent the final year finishing “single- handed” jobs and generally running things down.

The three ponds in Christmas Lane were connected with the pond in the tithe barn. Water ran from Christmas Lane in the direction of Jubilee Cottages, where it was drained away. St. Margaret’s Court was built bang on the site of the pond.

On occasions when the village pump dried up, the parson would go with horse and cart to Lipwell and fetch barrels of water to sell to the villagers. Mains water came to High Halstow in 1909 (*see cast iron cover outside village shop for date), it wasc1915 before mains water extended to the farther cottages in the village).
Among the odds and ends in Mr. Plewis’s workshop were window sashes with mahogany bars, said to be from Bessie’s hall (Elizabeth Hall). They had very elaborate beading.
The church brasses were found tucked away in the workshop in Mr. Harryman’s time. Mr Plewis supposes that must have come in at some time to be mounted on a board, and then put to one side until they had been completely forgotten about.

Mr. Henry Victor Scales, School teacher, moved to Stoke from High Halstow. He would pick up the cane first thing in the morning, and not put it down till the end of the day. His trouser-ends were frayed from his habit of constantly flicking them with the cane. He wore a black jacket and tight trousers. He had one son – Monty _ who went to the Argentine working as an engineer for Thorney-crofts, and was killed there in an explosion. He had two daughters – Norah who married an army officer, and Katharine, who remained unmarried and moved with the family to Groombridge.

Mr. Baskin followed Mr. Scales as a teacher at High Halstow. He was Irish, but a good teacher. He would lay children across his desk and beat them. After his retirement he had a letter form a Bance, a chief of Police in the USA, thanking him for his strict discipline, which he said made him what he was.

Main crop farmers grew potatoes, corn crop, cereals, seeds (canary, radish, linseed). Only small holders grew beetroot and things. It is now cheaper to import the seed crops.
Mr. Plewis’ s father and grandfather worked locally in similar trades, mending fences etc in the winter months. Mr. Plewis thinks that one of his ancestors, a John ap Lewis, was a drover who drove sheep from Wales, using the Hoo Peninsula as a grazing area for fattening livestock before selling it in the London market. Possibly that was how the ap Lewises settled there.