With it being the 100 years since the end of World War One, High Halstow have a number of events commemorating this as follows: 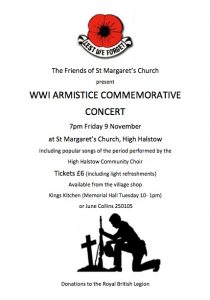 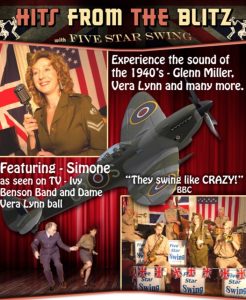 This includes a donation to Royal British Legion.

To Commemorate the Centenary St. Margaret’s Church has been decorated with 1918

(at least) poppies knitted by many in the village. 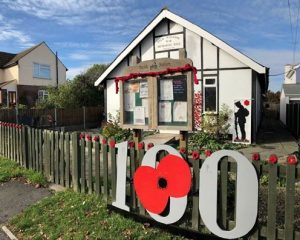 As most of you are aware the Hall was built in 1923 to honour the 66 men who went to war in 1914 with 55 returning, and will be commemorating the 100 year anniversary of the end of the war in 1918. Photographs are displayed in the hall permanently but a book has been compiled by Ray Collins giving details of the men and will be on display with other memorabilia.

To mark this anniversary a bench has been purchased and installed in the garden and many comments on how nice it looks received. Donations have been made for this purchase from W.I. Kings Kitchen and quiz night held on 28 September, which are very much appreciated.

The Hall will be open on the above date 10 30am until 2pm with refreshments provided so hope you will come along and see the history of the Hall. November 2018

This entry was posted in Blog. Bookmark the permalink.