It all started after I received my own ‘There but not there’ Perspex statue at the beginning of this year. Quite a lot of mainstream media were covering events being held to commemorate 100 years since the end of the Great War, many including pictures of ‘Tommy’ temporary statues being placed around the UK. It started me thinking that I could possibly produce some of these to be displayed, possibly in the Church Yard.

Trawling online I found a picture of a granite statue, showing a WW1 soldier with his head bowed and Arms reversed and decided this would be the image I would copy. The pose of a soldier in the position of ‘Rest on Arms Reversed’ is the traditional stance for soldiers offering their final respect to a fallen comrade. 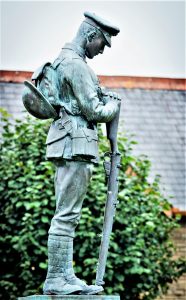 After many failed attempts, I managed to produce a paper print out (on 20 sheets of A4) of a full size Tommy, and after sticking them onto a large sheet of plywood, I had my initial pattern.

Cutting out the first one, using an electric jigsaw took a long time, as I attempted to perfect the detail, until it eventually dawned on me that I was using an image taken from a photo of a granite statue! Such statues are not created in fine detail.

Posting a picture on the High Halstow Facebook page, I could not believe the interest from other people who wished to produce their own. Many people have used my original Tommy to draw around on to their own Plywood and off they went. Some people, who gave a lot of thought to it, turned up with a roll of wallpaper and traced onto that. Much easier to transport.

From these new ones, many more have been copied again, and again. I got the impression that they were breeding faster than rabbits.One thing that dawned on me as I was cutting out my fourth or fifth one, was that all these Tommies are different. Being hand-made, no two can be exactly the same, just like the soldiers they represent. From a distance they all look identical but in reality they are all individual.

I am aware that apart from High Halstow, Tommy has migrated to All Hallows, Hoo, Upnor, Gillingham, Suffolk, Salisbury and Southampton.

This can only happen in the type of community like we live in. Individual people taking the time, effort and some expenditure to produce what I think is a fitting tribute to those that gave the ultimate sacrifice. Steve Joyce October 2018

We will remember them

This entry was posted in Blog. Bookmark the permalink.